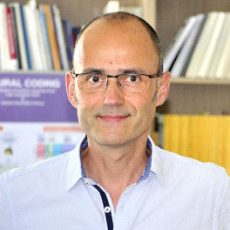 Prof. Fabrice Wendling (PhD) holds a position of Director of Research at INSERM. He is heading the team SESAME: “Epileptogenic Systems: Signals and Models”, LTSI – INSERM U1099, Rennes, France since 2004. He received the Engineering Diploma (1989) from the University of Technology of Compiègne (France) and the Master of Science (1991) in Bio-Engineering from the Georgia Institute of Technology (Atlanta, USA). He obtained the PhD degree (1996) and the Habilitation (2003) from the University of Rennes (France).

Fabrice Wendling has been working in the field of Biomedical Engineering applied to Epilepsy for 20 years in close collaboration with neurologists. He has developed advanced diagnostic methods based on nonlinear dynamics and electrophysiological signal processing. He has always been deeply involved in the search for mechanisms underlying epileptic activity. To this aim, he has developed pioneering models of epileptiform activity specifically adapted to the cellular organization of brain structures involved in partial epilepsies. Some of these models are being used worldwide to analyze epileptic signals. In 2012, he received the award from the French Academy of Science for “outstanding contribution to the processing and modeling of electrophysiological signals in the context of epilepsy”. In 2018, he received the research award from the Rennes 1 Foundation for his research on innovative dense-EEG methods for brain connectivity estimation.
His current scientific projects promote the combination of computational, clinical and experimental approaches to develop novel therapeutic procedures, in particular based on electrical stimulation. In 2019, he received, with Fabrice Bartolomei (Marseille) and Giulio Ruffini (Barcelona), the prestigious ERC-Synergy grant by the European Research Council for the GALVANI Project entitled “Controlling epileptic brain networks with computationally optimized weak electric fields”.